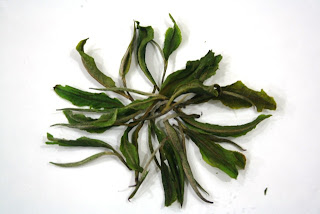 This premium Darjeeling White tea is simply the best white tea made in this harvest, this tea is plucked from pure AV2 and T78 young clonal bushes of the garden at the early hours of the morning when the dew drops are still present on the 2 leaf and a bud to maintain the tenderness of the leaf quality, then the raw leaves are treated with cold air on the withering bed for 48 hours which gives the tea an extra bright greenish look and then the tea is hand rolled in silk cloth to keep the 2 leaf and a bud look intact and the tea is further sent for the firing process, this tea is further sorted by 8-12 women sorters very carefully to remove any unwanted particles from this made tea as a result of which this tea is extremely clean without any dust particles or any type of stalks, when this tea is steeped for about 4 minutes the cup gives out a very bright greenish liquor which is a very good sign of a true white tea, the aroma of the tea is well defined and is rather traditional as raw hints of flowers like Rhododendrons and Marigold can be clearly felt over the cup, each sip in the cup is simply awesome as the cup is extremely mellow, the floral characters just moves around the palate leaving some vegetal notes as an after taste.
The Best Darjeeling White tea ever made which can definitely beat any Darjeeling white teas like the Arya Pearl, Okayti silver tips or the Phoobshering White tea and can give a stiff competition to any high quality Chinese white and green teas.
Posted by Tea Emporium - Authentic Darjeeling Tea at 2:16 PM 5 comments:


This 1st Flush 2010 Darjeeling tea harvest has been a hard one, where all other merchants and exporters of Darjeeling teas are literally crying for high quality teas as there is a serious crunch for good quality teas, I’ve been lucky enough as my hard work has been paying off smoothly, I had booked an invoice of Turzum some 20 days back hoping that we will be able to get the same quality label tea as last year ,(Turzum is a organic division of the Sungma plantation in Darjeeling which mainly consists of BB157 clonal bushes and Camellia Assamica bushes) , But seeing the harvest conditions this year I was not sure if we will get anything serious from this garden on time as Sungma and Turzum is a late starter in1st Flush harvest, so on the 3rd of April Mr. Jha (Superintendent of Sungma,Risheehat and Balasun Tea Estates) gave me a call that the 1st invoice of Turzum was ready and a sample was sent to me, Mr. Jha is also a very popular figure in the Darjeeling tea industry for his excellent tea making art and I was sure that ,to get his 1st invoice that’s DJ-1 will not be easy as at least top 50 buyers from all around the world will bid for this tea….. Sungma tea estate is located in Pokriabong valley of Darjeeling district and is just one and a half hour drive from our retail outlet, so finally the sample arrived and yes the tea is extremely good ,very well twisted and lots of silver tips in it, so we immediately steeped the tea and the cup also gave a very good result, really very fruity tea without any bitterness,so after few hours of intense bidding we finally got the tea and I`m really proud of 2 things and that is DJ-1 its an honour and secondly the sample of the tea was catered to selected premium buyers only,and we were among the few of their premium buyers who were catered with this premium tea sample,all I can say about this tea is that this tea is a true nectar of the nature and cannot be further replicated this 1st Flush 2010 harvest.
Posted by Tea Emporium - Authentic Darjeeling Tea at 1:39 PM 2 comments: 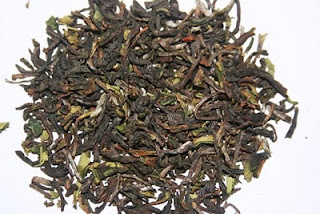 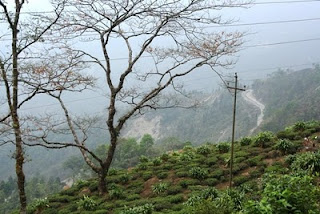 As days passed away the temperature is rising in Darjeeling and still not enough rain to boost some fresh new leaves to have enough good teas in the market, the early premium 1st Flush harvest season is already over and we have successfully procured early season teas like the Thurbo White delight Ex-1, Castleton Moonlight Ex-1 and Puttabong/Organic Queen sftgfop-1 Dj-5, tea lovers all around the world who have ordered these teas have really appreciated teas, actually the early 1st Flush harvest starts from the 2nd week of March to the maximum last week of March , as soon as the pre-summers i.e. temperatures over 28 degrees Celsius hits the harvest the leafs and the shoots starts getting dehydrated and as more temperature rises the harvest moves towards the dormant period. Now it was a real challenge for us to get a tea which was good and which could stand along the list of other excellent teas that were offered in our list of 1st Flush 2010 teas, this was the category where the tea had to be good but also had to be affordable, I tried various plantation like Goomtee, Jungpana, Giddapahar etc. but nothing was taking my breath away…..well talking about Giddapahar I have never tasted anything fantastic from this plantation but when I read other`s reviews I always thought those were the teas which I missed to taste (well many do not give the DJ No./Invoice no.), so this year I personally visited the garden on the 28th of March`2010, the owner Mr. Shudhansu was really kind enough to welcome us and offer all the 7 invoices samples of the 1st Flush 2010 of his garden Giddapahar T.E. I tasted from the very 1st invoice to the 7th invoice and 1 particular thing I can say about this garden is that all the teas were high fired and had relatively blackish appearance which is not a very good sign of a good quality 1st Flush tea, I was surprised that if the very 1st invoices of the garden was of this character then people must be marketing this high fired character as muscatels and so on….but this is no muscatel character,well we will have to discuss more on this in this coming 2nd Flush, but all I can say is that this garden is a standard garden which makes nice Darjeeling teas but not the best ,I also tried their Giddapahar Ex-1 and Ex-2, they had named this tea as some china delight /china spl. Or something which I don’t remember and claimed these teas as their best of the season but I had already seen and brought some of the finest in the Darjeeling tea 2010 harvest so my expectations were very high, well I do not want to comment on these teas anymore but can only say one thing that if you see someone comparing these invoices from this garden with any of the Puttabongs and Castletons etc. then please give us an opportunity by ordering a small quantity and compare for yourself that what you had been missing when you expected to order high end Darjeeling teas and ended being recommended mid –class teas by new vendors in the trade…..Well lets come straight to the point that I wanted a good tea that was equally high quality but would be affordable for all, my all time favorite gardens in this category was Balasun T.E. and Barnesbeg T.E. I had had to decline both the teas as one was over priced and one was high fired tea and the manager tried to sell us this tea as a good flavoury 1st Flush tea but I know the definition of flavor in Darjeeling tea and a high fire smell….I was really getting upset as I just couldn’t get anything to complete the list and so much responsibility was there on my shoulders, I was literally getting bombarded by e-mails from various tea merchants around the world, so on the 30th of March`10 I got a call from Mr. Parekh (factory assistant Manager of Singbulli Tea Estate) that a very nice china line invoice was ready and he was sending me the sample and as usual I had very less time in hand to make a decision, Singbulli tea estate is situated in the Mirik Valley in Darjeeling district and is just two and a half hours drive away from my retail-outlet, so I finally received few samples and choose the Singbulli Dj-28 sftgfop-1 china to be in my list as this tea was from the mid harvest of 1st Flush 2010 but still had that greenish appearance and had a really refreshing aroma in both the dry leaf state and the cup.Well I`m satisfied with this tea and I hope you`ll also like it,so please come and discover Singbulli sftgfop-1ch. Dj-28 1st Flush Darjeeling tea 2010
Posted by Tea Emporium - Authentic Darjeeling Tea at 3:34 PM No comments: